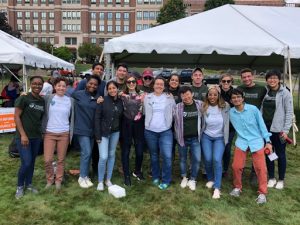 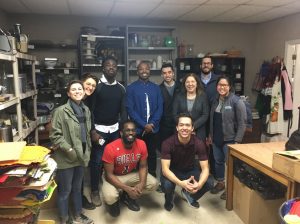 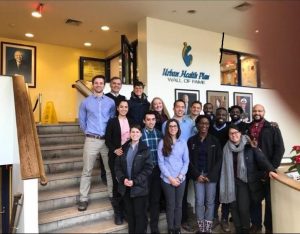 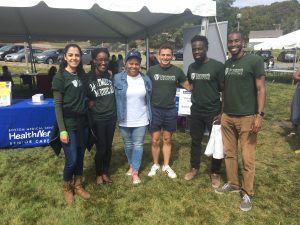 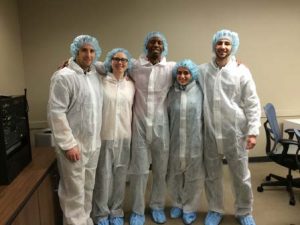 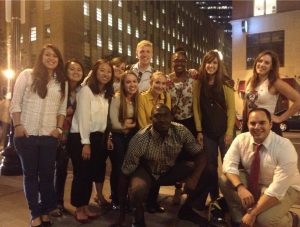 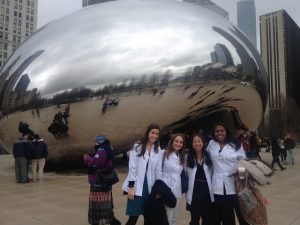 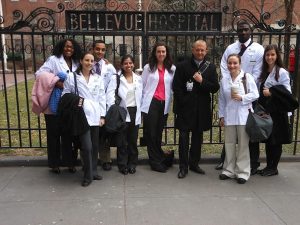 In January of the 2012/2013 Geisel academic year, four MS2 Geisel School of Medicine Scholars (Swapna Sharma, Emily Carson, Katherine Zeitler and Joseph Graterol) and five MS1 Geisel School of Medicine Scholars (Asha Clarke, Bianca Williams, Inyang Jr Udo-Inyang, Asha McClurg, and Evelyn Bae) visited the city of New York, a city which boasts an incredibly diverse racial, ethnic, and socioeconomic population. A number of the city's hospitals and other healthcare organizations are still recovering from the recent flooding and damage brought on by Hurricane Sandy. The Scholars were thus presented with the unique opportunity to learn about the city's immediate and long-term response to this natural disaster, as well as the ways in which New York's more vulnerable populations were affected by the emergency evacuation and could be better protected in the future.

During their trip, the scholars had the opportunity to visit and tour the Lawrence Family Health Center, discuss Medical-Legal partnerships with Geisel alumna Dr. Megan Sandel in the Boston Medical Pediatrics department, volunteer at the annual Mattapan Health Care Revival, among many other things. The scholars followed up this trip with a journal article discussion back at Geisel about the work that Dr. Sandel has undertaken with Medical-Legal partnerships, so that their fellow students could also be informed about her work. 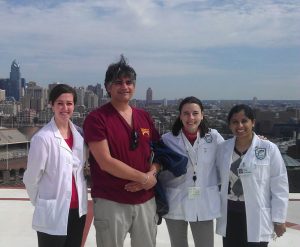 During the Spring break period of the 2011/2012 Geisel academic year, all four MS1 Geisel School of Medicine scholars (Swapna Sharma, Emily Carson, Katherine Zeitler and Joseph Graterol) visited the city of Philadelphia, a city with a considerably diverse racial, ethnic, and socioeconomic population, and a great model for learning about urban medicine.

During their trip, the scholars had the opportunity to shadow in bustling community clinics, attend a conference at CHOP about Asthma Disparities, and tour a homeless shelter serving runaway youth… among many other things! The scholars were also fortunate to meet with several Geisel alumni who currently reside in Philadelphia. Dr. Roy Wade, however, deserves a special mention. Dr. Wade, a well-known Geisel alumnus who is now a Clinical Scholars Fellow with the Robert Wood Johnson Foundation, played a very significant role in making this trip possible for the scholars.

The Urban Health Scholars traveled to New York City for a two-day immersion in urban health. The team visited a public hospital, a community health clinic, a free clinic, and a private pediatrics practice. The UHS members also worked at a soup kitchen and met with public health workers.

The Urban Health Scholars returned to Mattapan in 2011 and once again enjoyed participating in the Health Care Revival. The group had the chance to teach the community about exercise, healthy diet and exercise. The group also visited the Lawrence Family Medicine Clinic and met with several Geisel alumni who shared their experiences in med school and beyond. Also on the itinerary was the Lemuel Shattuck Hospital, Boston Health Care for the Homeless Program, and Culture InSight. 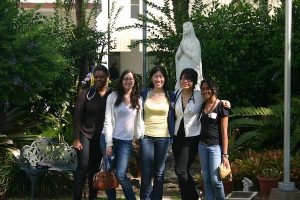 UHS traveled to Miami, Florida to provide service and outreach to communities around Miami. The group's goals were to provide community service, get a sense of the health care system in Miami-Dade County, learn about the medical challenges facing immigrant communities, and promote diversity in health care careers. To meet these goals, UHS participated in a variety of clinical, teaching, and outreach experiences.

During the 2010 Cultural Immersion Tour, the first and second year UHS spend the weekend in Concord, NH and Boston, MA. After attending a meeting with Geisel alum, Dr. Trinidad Tellez, they received a tour of the Harvard Street Neighborhood Health Clinic, and ended the day having dinner with Geisel alum, Dr. Roy Wade, who offered guidance to the students. The following day was spent at an annual Health Care Revival (organized by the Mattapan Community Health Center) where they ran a table about HIV testing, performed blood pressure screening, and assisted other groups who were also at the event.

In 2010, members of UHS traveled to Washington D.C. and earned valuable clinical and service experience at the Bread for the City Clinic. While the Geisel students were able to shadow some doctors, they were also able to learn more about health in urban areas, as well as the relationship between health and government.

Back to UHS Home