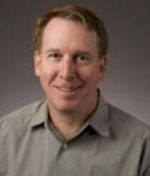 A graduate of Dartmouth College and Dartmouth Medical School, Dr. Doug Williamson is a Hanover resident and the head of Maternal and Child Health at Alice Peck Day Hospital in Lebanon, NH, where he began practicing in 1997.

A significant part of Doug's practice is caring for families with an autistic child. He is respected and beloved by these families and children because he listens, he is unflappable, and his actions and words transmit the fact that he really cares about their daily challenges and joys.

His commitment to Dartmouth is a second - and now third - generation commitment. Doug is the son of Susan and the late Peter Williamson, MD, professor of Medicine (Neurology) at Dartmouth Medical School and founder of the Dartmouth-Hitchcock Epilepsy Center.

In addition to being named to the Geisel School of Medicine Board of Advisors in September, 2011, Dr. Williamson was also the Alumni Speaker at the 2011 White Coat Ceremony.